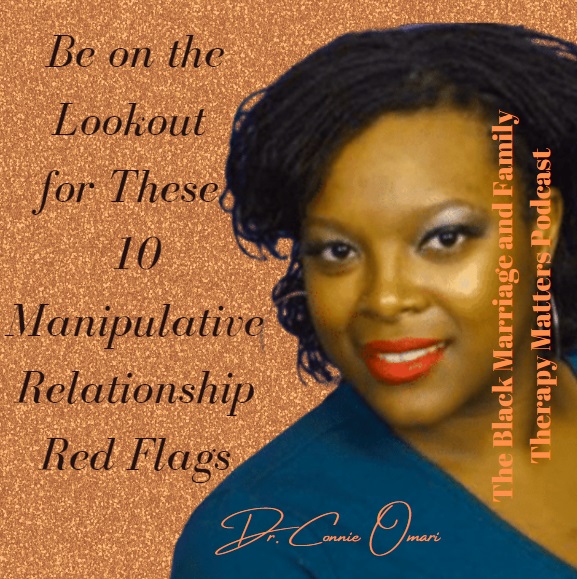 Hey, Hey, Hey, and welcome to the Black Marriage and Family Therapy matters Podcast, where we connect black families to black therapists.

Okay. All right. So thank you for joining me today. So why is talking about manipulation important? A lot of times the clients that I work with have a tendency to think that the things that people say to them are true. And they don’t recognize that if a person tells you something, that it doesn’t feel right, that there’s a huge possibility that it’s not right, and that that person is manipulating you. And they’re actually feeding off of your feelings of insecurity, or maybe your feelings of wanting the relationship to work, such that you will, in the hopes that okay, you will ignore what your instinct your gut is telling you, and instead, allow their manipulation to prevail. Okay, it’s a tactic that’s used to to dominate and control. But today, we are spilling the beans.

So I want to give you 10 signs that manipulation is occurring in your relationship. And just to clarify, this can occur with a significant other, a parent, a sibling, Guardian, whatever, a work relationship, whatever. But, you know, for the purposes of this podcast, we’re talking about black families.

So let’s go ahead and get this started.

Red Flag number one, if you don’t give them what they want, they will withdraw their love and affection. Now, I don’t like when this happens. Because I think a lot of times, we as women, we are taught to value our self worth, based upon how other people perceive us. So if we are trying to assert our authority, or get what we need, or do what we want, or, you know, get our needs met, and if another person responds by withholding from us, there’s a tendency that we will internalize and absorb that to be our stuff. Ladies, oftentimes, it’s not. And it’s a manipulative strategy by someone else to keep you under their spell. Don’t let it happen.

Okay, your words are used against you, red flag number two. So let’s say you are committed to being the homemaker of the home, you want to, you’re responsible for cleaning, for cooking, for doing the things that make the home functional, for let’s say, You’re sick, and your partner, rather than having empathy for the fact that you’re sick, and you can’t commit to your promise. They want to manipulate you and have you feeling better, maybe you’re just frustrated, you know, you don’t have to be physically sick, you can be emotionally sick for the day, that’s really important. And that’s really a valid issue. But a person, a manipulative partner, will not give you any grace, though, they’ll use it against you and make you feel like confined to this commitment that you made, irrespective of the circumstances, which might make it hard to fulfill that commitment.

Okay, red flag. Number three, they try to isolate you. Chances are if you’re in a relationship with someone who’s manipulative, somebody that you care about knows it too. And that person is going to try to protect you. And that person is going to try to make sure that these things do not happen. And the only way that the manipulative person is going to be able to maintain dominance over you, is to pretend that these things are not happening or not going on, the only way they can do that is if they separate you from the people who will spill the beans and let it be known that this is happening. So try as much as possible to not let anybody isolate you or detect when you’re feeling isolated, and respond appropriately to where you’re not going to allow that type of thing to happen.

Red Flag number four, you are unhappy in the relationship, but you also fear losing it. This is a big one because the women that I work with constantly come to me letting me know that look. They’re not happy in the situation that they’re in. He’s unfaithful, he’s untrustworthy. He doesn’t bring money to the table. He don’t feel good with him. But there’s a fear with you about leaving. Now listen, this isn’t the manipulative strategy about him. This is the manipulated his strategy about you. Because there’s something about the idea of being in relationship that you’re drawn to, but not necessarily the person or the actual relationship that you’re in. And we do have a capacity sometimes to fool ourselves.

To convince ourselves that things are happening in a better way than they actually are in relationship red flag number five, they make you question your own sanity. This comes with the gaslighting the statements like I didn’t say that I didn’t do that you’re making things up. That’s not true. That’s not what happened that drives me insane. My uncle God rest his soul, used to say, Don’t piss on me and tell me it’s raining. Okay, if you know what is true, and that the person on the other side is trying to mislead you, and deceive you pay attention. Okay, that is a red flag.

Red Flag, Number six, they make a disturbing statement, then claim that you misunderstood what they said, a lot of times this has to do with I know I use domestic violence a lot, but a lot of times, men will tell you hey, you know, they’ll let you know that they’ve been abusive to previous relationships, or even like with sexual misconduct, you know, and then, if you detect them saying something, I’m just throwing this out here. These are uncomfortable things, but that’s what I do. I talk about uncomfortable things. So if they give you a sign that they had a younger girlfriend, now your mind is telling you, this doesn’t seem right like this, my boyfriend is 30 years old, but the person he’s talking about is 15. You know what you heard? But he comes up with what she looks old, or she acts older, or, you know, she told me she was older, etc. But if he knows that she’s a younger person, that makes him what he is, okay, you’re not misunderstanding anything. It’s something that you have to take into consideration with who you’re with, because guess what, if somebody will take advantage of a child that tells you a lot about their character, what more could they potentially do about you? Or what’s the likelihood, especially if you want children, that he will even have the capacity, the mental clarity to understand how to protect yours, okay? Or the same thing can happen if you already have children. So you know, a lot of times we ignore manipulation, when it’s presented to us, but then when it’s used against us, we struggle with it even more. So when a person tells you who they are, believe them.

All right, the next red flag of manipulation, they say that they’re helping, but they’re helped makes you feel miserable. Gosh, you all, we all have that person who under the skies, and I was just helping our I did the best I could, or whatever I get it, you know, we’re all about resolving conflict, having healthy relationships with people, you have to be accountable for what they do. And a lot of times people manipulate situations under the guise of helping when they’re really harming us. And they’re not open to hearing how they’re harming us. So they continue to harm us. That’s manipulation. Because guess what if a person really wants to help you, okay, and you don’t receive the help, and then they try to force it on you there is an ulterior motive. There’s an ulterior motive. And that is often for their own interest, and it comes off in the form of manipulation. All right, your relationships feel very isolated. Okay. So we said earlier that they try to isolate you, more or less from family and friends. But now, it’s like, it’s really just you in that person. All right, that is the main issue here. And it’s very frustrating to be in a relationship where like, no one else exists. You don’t have work partners, you don’t have, you know, extended family members like nobody’s available. It’s just like a one way street between you and your significant other. And again, it’s all about domination and control, and ways to bring you in and eliminate your resources and support for getting out and having alternative experiences.

All right, we have two more relationship flag number nine, they make you feel guilty. This happens a lot when you want to just live your own life and do your own things. I can’t tell you the amount of times where I’ve just really wanted to do what’s best for me. I believe that there’s two of the most important days of your life. And I’m sure you’ve probably heard this before. It’s the day that you were born. And the day that you figure out why. And a lot of people don’t focus on the day that they figured out why they follow the rules. They follow the steps they follow the system that’s been created before them, they do what other people are doing. And guess what when you do that people will bring you down, they’ll make you feel guilty and it’s within that guilt that most people remain and will not step out and keep doing what they need to do to be successful. To be sustainable, to be their best authentic self. Don’t let anybody make you feel guilty, because the truth of the matter is, they can do the same things that you’re trying to do, they choose not to. And instead, it’s easier to pull you down and prevent you from meeting their purpose, because the truth of the matter is deep down inside, they want to meet your own purposes and cannot. And your reminder of living in your purpose is a threat to them. And that makes them uncomfortable. Okay, so that is what’s going on with that. And that’s a form of manipulation.

And last, but certainly not least, our number 10 manipulative red flag is going to be they try to one up you, every single thing that you do, the person tries to tell you tries to be better than you, oh, well, you got a new car. Well, they got a newer one, or they got one a different color are i remember i told a family member of mine, just you know that I had gotten class president when I was in high school, and I was really excited about it. And their response was me it was I was the class president all four years. And I’m like that. I’m not trying to say that doesn’t happen, but I think it’s very rare. But it’s that type of thing. Like you can’t live in your positive space, because the other person is just always trying to do something better than you.

So listen, people are imperfect. All right, relationships are imperfect. But manipulation is something that people use to gain control and dominance over you. Don’t let it happen. I hope these tips will help you know what to look for, and will give you awareness of the red flags you need to look for. If you’re in a relationship where manipulation is taking control. Thank you again for inviting me into your life, letting me spread some level of joy and positivity into you and feed you so that you can live the life that you deserve. Okay, until we meet again, take care, peace and blessings.